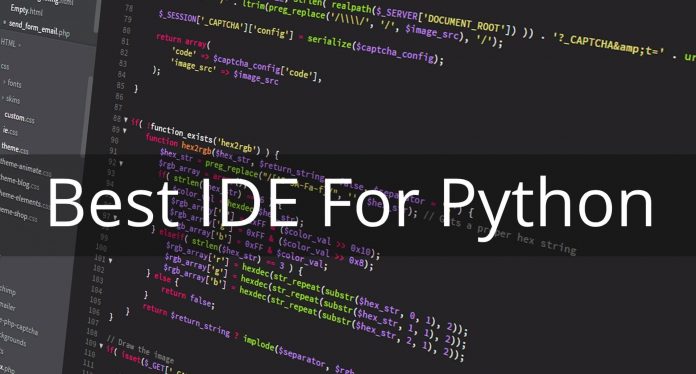 Its a very powerful language can be used to develop applications in less number of code lines giving the same and better-intended output.

According to TIOBE, Python was the Best language of the year 2018 also. Click on the image to view in Fullscreen.

Like all other languages it can also be written using terminal or command prompt but if you are into IDE or want a Graphical user interface software where you can write the code and can debug the code easily then its a good thing as we are bringing you the list of best IDEs for Python language present currently in the market.

What is Integrated Development Environment (IDE)?

Integrated Development Environment or IDE is an application that provides comprehensive facilities to computer programmers for software development. An IDE normally consists of a source code editor, build automation tools, and a debugger.

In this post, I am going to list famous IDEs which developers use and also include some of my favorites too!

Nowadays Atom IDE is one of the most popular among all developers. They like the simple interface(just like the notepad) and at the same time provides plugins type of features to install various packages into their Atom IDE without going to the browser.

Atom is a free and open-source text and source code editor for macOS, Linux, and Microsoft Windows with support for plug-ins written in Node.js, and embedded Git Control, developed by GitHub. Atom is a desktop application built using web technologies.

Few of the features of Atom are:-

Has more languages available than normal programmers can use, having add-ons and support for their uses: Html, CSS, PHP, composer, JSON, js, and so many more extending with plugins is your friend too. working with bootstrap? there’s an auto-completion plugin as well.

When it comes to the development of applications, Microsoft is hard to ignore. The company had laid the foundation of OS which we now use, and today it’s helping to code applications in C sharp and in other languages too.

Pycharm is one of my favorite IDE for python programming and is my main daily driver for programming.

PyCharm is an integrated development environment used in computer programming, specifically for the Python language. It is developed by the Czech company JetBrains.

You can download Pycharm by visiting the JetBrains’ official site dedicated for the IDE.

No its not the movie but a Python IDE. Spyder is an open source cross-platform integrated development environment for scientific programming in the Python language.

It’s not much known or used IDE but it is one of the IDEs dedicated for scientific programming, and if you are into such stuff this IDE should be your first pick!

Okay so if you are new into Python programming you might not hear of it as its uses are more complex.

The Jupyter Notebook is an open-source web application that allows you to create and share documents that contain live code, equations, visualizations, and narrative text.

I would like to say that if you are a general programmer you can go with Pycharm or Atom anyway. But if you are into scientific programming or programming that involves visualization then go for Spyder.

How to Activate Dark Mode on Youtube Desktop & App

What is Dark Mode or Night Mode? As now majority of the phones sport an OLED display, manufacturers are trying to embed dark themes in...
Read more

How to jump from one activity to another activity in Kotlin

In this tutorial, we will learn how to jump from one activity to another activity in kotlin. This is the main activity...
Read more

We all know that Nokia has come up with its all-new 5 camera smartphone called Nokia 9 Pureview. But Nokia is not behind in...
Read more

How to put any song as ringtone on any iPhone?

We all know that iOS is very restricted and Apple provides with very less control over their operating system. Currently, by default, you can...
Read more
Load more