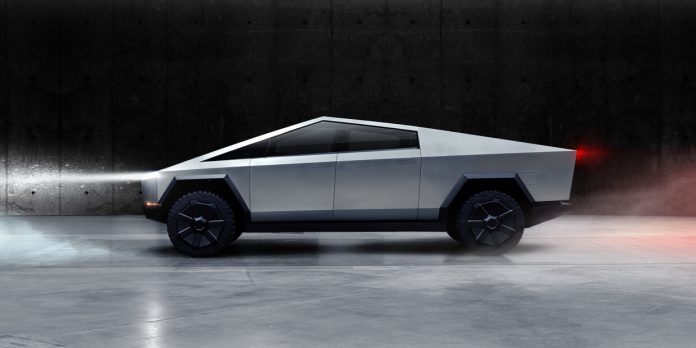 Are you into gaming or love watching sci-fi movies?  What about those back to the future movies which gave us a glimpse of the future and in that future, our daytime batman- Elon Musk saw something and bought it to life, the new Tesla Cybertruck.

Yes, it is something so new and revolutionary that we need to even add a new word into our dictionaries.

On 21st Nov 2019, in a Tesla event, Elon Musk unveiled a new vehicle in the Tesla line-up –the Cybertruck. The Cybertruck is a 6-seater electric-powered truck that needs a new design category to put in.

This truck, although electric powered could beat a Porche 911 with its 0-60 mph in a time of 2.9 seconds. These are some of the different variants of the Cybertruck.

If these numbers aren’t enough for you then there is a lot for you. Such as, a standard feature will include onboard power inverters for supplying both 120 Volts as well as 240 Volts of electricity; this allows usage of power tools without any portable generator. The Exterior is made so tough that it is tested and approved bullet-resistant against a 9mm bullet.  A video demonstration was also shown at the event showing the power of the Cybertruck by pulling the Ford F-250 like it was a toy.

Also, Tesla Autopilot is obviously integrated. At the end of the event, Tesla ATV was announced and gave us a kind of a teaser for what’s upcoming.

But the important news relevant to Cybertruck was that you can park the Tesla ATV in the rear cargo area and could simultaneously charge the batteries of the ATV from the Cybertruck itself.

In the end, we can say that the Cybertruck looks nothing like traditional pickup trucks but looks like a mean looking machine from the future which feels like it is indestructible, although not really true for now, pun intended.

The Cybertruck is undeniably tough, but the mishap which took may make someone doubt if what they are seeing is true or the numbers are just on papers. I guess, time and time again Tesla has proven its capabilities and innovation under the guidance of Elon Musk and that is enough to say that failures are just minor setbacks and nothing else.

Go order one at – https://www.tesla.com/cybertruck/

How To Set Up Multiple Monitors On Windows 10

Are you someone who uses multiple windows simultaneously? If yes, you definitely could use various monitors. It would not only make your...
Read more

Are you looking for the best offline football games? Football is one of the world's most popular games. Even it is one...
Read more